by Linda Scanlan on I Knew I Could Fly
on the yourLDSneighborhood Newsstand - 5 May, 2008

Leonardo DiCaprio and Claire Danes starred in the 1996 Shakespearean film “Romeo and Juliet”. A new generation was introduced to this classic set in “the futuristic urban backdrop of Verona Beach.” Though in a modern setting, the original dialog has been maintained. The combination of old and new created a new form of “classic” for movie goers. ~ Read More 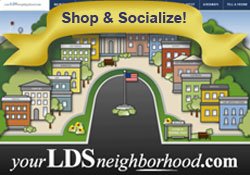